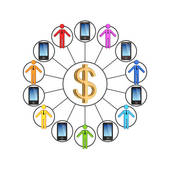 Social currency is the first item in the acronym STEPPS, from the book Contagious, Why Things Catch On, by Jonah Berger. This path or methodology is designed to allow for the formation of a strategy for those who want to get an idea across in social media in a very big way, through word of mouth.

The biggest way to engage a large segment of the population in your story about your volunteer efforts or groups is through social media, in all of its parts and pieces.

The six steps, or STEPPS are a mix  of logic and emotional promotional material coordinated when successful into a message which stays on topic and is both positive but also  reaches a huge segment of the target audience or even further.

The fist thing that most folks consider when they are thinking of their favorite charity or volunteer group is that the image must be protected  from any character stains or scams or any negative publicity. This is a very real danger. You must not be seen as in it for the money, but keep the focus on the charity and the message the charity represents.

As I write this the fringe political groups which have banded together in a loose association recently around an issue of constitutional vigilantism were on a virial wave that seemed to be growing fast and furious, with no end in sight and potentially climaxing in armed conflict with Federal Officers. Then the focus person who was riding the wave up to a seemingly endless crest spouted something very foolish, and worse politically damaging to his gathering of conservative politicians and news commentators. Now the many elements of the groups who supported him are abandoning him like he had a contagious disease!

Future posts will expand on these STEPPS and how to apply them to advance your charity, your positive message to the public, and hopefully to avoid the pitfalls of any negative issues.