Home > Empowered Volunteer > Passion for what you enjoy! 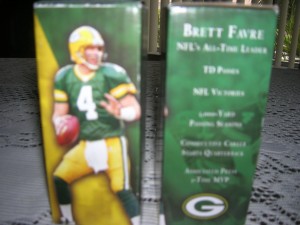 Some people become famous in part because they show their passion for their cause to everyone they meet. It seems to be a part of them. They live to support that group or business or team!

The caption above of Bret Favre bobble heads was offered to those of us attending the last game Bret Favre ever played in Green Bay as a Green Bay Packer. I was lucky enough to be at that very cold game at the “frozen tundra” of Green Bay, Wisconsin. The Green Bay Packers lost in overtime to the New York Giants, who went on to win the Super Bowl that year.

In the history of football it is arguable that no one else who played could be more associated with the passion of playing the game than Bret Favre.

He certainly would be one of the more famous of the passionate players ever to have played, no matter which team you might support. Most fans can remember his jumping up and down and waving his hands as he threw touch downs to his receivers. The energy he showed was really impressive. For the Packer fans, it was infectious. Bret was passion, pure and simple.

This is the kind of passion that everyone needs to find in their lives. The business person who never notices the long hours at his or her own business is a prime example. The sports fan who travels to every venue that their sport or team has to play at in support of their team. This is really dedicated and every sport covets those fans who are so dedicated as to travel with the team!

You can find passion for the arts, for so many sports fans from race car driving to the NFL football or NCAA college football, particularly in the southern United States, to soccer as a worldwide passionate sport! Individual sporting events can muster passion too, such as golf or tennis.

Passion can’t be measured solely by how many fans it possesses either.

Recent threats by the Olympic Committee to eliminate Olympic Wrestling from participating in any future Olympics has brought out the passion for the sport from every country and from seemingly everywhere recently. Traditional wrestling powerhouses in college such as the University of Iowa have banded together with other college teams and coaches and support groups to save Olympic wrestling. The passion can be felt in nearly every Face Book posting on the subject. For fans who are old enough, Dan Gable represents the passion of the native Iowan who made it to the Olympics and set a record for never in any match allowing the opposition to score on him! Folks, that is passion!

Wrestling doesn’t have a professional aspect to it, despite the versions of so called professional wrestling contests that one can view on cable, which are scripted and very dangerous for the participants but are not in any way real wrestling. So the stake are high if they fail to save wrestling and there is no longer a route for the graduated college athlete beyond college.

For the empowered volunteer, he or she needs to channel the passion that is abundantly clear and visible in so many people who are living their dream job or finding their passion on weekends. Everyone should feel that passion, even if they are only able to do it for a short time with the intensity that is needed.

Passion forces you to fully focus on your task or objective.

For football fans that are watching at a stadium, passion is something that is obvious but very hard to measure. Legendary names in football such as the late Reggie White who helped the Green Bay Packers win a Super Bowl are thought of by football fans of all teams as passion personified. Reggie played with a young Bret Favre who went on to personify passion for the game after Reggie retired.

Reggie White had another passion, which was evangelism.

He carried that message of Jesus to every locker room he ever went into. So Reggie was passionate on many levels and he is still renowned for that very high level of passion that he brought to life. It is very hard to harness that amount of passion in one’s life. But volunteers would be well served to try.

What is holding you back from this level of passion for your volunteer group or the charity that your group supports? If it is something that can be fixed, do it. If it is something beyond your ability to fix, then find another volunteer opportunity that can elevate your passion to the heights necessary for you to thrive! Move it or lose it as the saying goes.

I have traveled to more than 30 countries in my life time. I have seen the passion people in other countries have for soccer, which is called football outside the United States. This passion is every bit as intense as what we see here in the United States for our football. Passion transmits itself across cultures and across borders. Passion is universal. It is the driving force for many projects in history and many things would never have been built without the passion for that effort.

In the military a famous saying goes like this, “Lead, follow, or get out of the way”.

For the empowered volunteer this is wise advice. If the passion you need is not found in the group or the service you provide to your charity, then either lead the group to the passion, follow a leader who is providing the passion, or get out of the way by going where your passion can be found and used.

How do you develop passion? Start with an honest evaluation of your habits and how they serve you. If your habits are not supporting the passion you need, consider changing them, one at a time until the environment evolves into one where your passion can emerge. See my post on habits and how to improve them.

Once you locate the precise habits that inhibit your pursuit of passion for your goals, consider modifying them or eliminating them and replacing them with habits that will support your goals.

For instance, if you find that a project for next year’s group which needs at a minimum twenty new members with specific talents and experience, and you identify with this goal, set your passion to action! Engage your leadership, develop a plan and show your energy in pursuing the goal. If you find that a setback holds you up, round up help by showing your enthusiasm and your energy and usually the obstacle will be eliminated. People rally to those with passion!

On Dec 22, 2003 Bret Favre played a football game with the Oakland Raiders right after his dad suddenly and unexpectedly passed away. He was so passionate that he had to play for the memory of his father and he would not consider stepping down that night. He passed for 399 yards with 4 scores in a 41 – 7 win. That night Bret’s receivers were not going to let him down. He led the team with a passion that just could not be stopped.

Passion is contagious. It is tangible. It is the one thing that can overcome seemingly mountainous odds.

If enough passionate empowered volunteers can be generated we will rebuild America’s volunteer groups and then we can do the same thing with the rest of the world too.

4 thoughts on “Passion for what you enjoy!”

Great weblog right here! Additionally your website rather a lot up very fast! What web host are you using? Can I get your affiliate link in your host? I want my web site loaded up as quickly as yours lol

I do believe this can be one of several much info in my situation. That i’m content researching your report. Nevertheless should really observation for a number of prevalent concerns, The web page style is right, your content articles is basically nice : Deb. Excellent activity, cheers